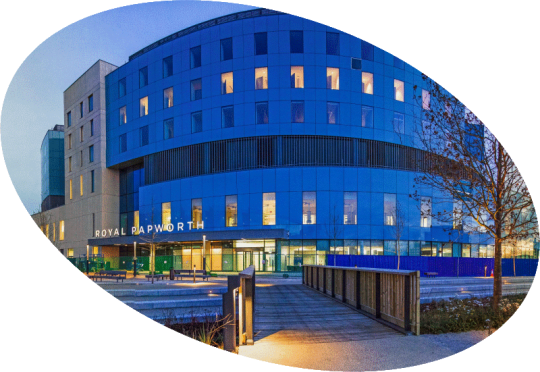 We are carrying out some work on site now and to get remote access quickly really helped. Danny was able offer me some options and clarified what I wanted and acted swiftly to sort it out. Danny was a great help and dealt with my ticket promptly – A+.

Royal Papworth Hospital is a world-leading cardiothoracic transplant centre. The new state-of-the-art hospital is located on the Cambridge Biomedical Campus. It was built by Skanska, and officially opened by Her Majesty the Queen in 2019. Skanska UK also provide a range of facilities management services to the site. Bob Foster, Senior Project Manager, contacted Modern Networks to setup secure network access for a remote worker, and make it appear as if they were present on-site. Danny Capener, Network Operations Engineer, responded to the request.

Danny confirmed with Bob that it was possible to setup the connection using FortiClient VPN software. However, Danny noticed that there was already an identical user account setup on the firewall. He queried the existing account and Bob confirmed the request was for a new user. Next, Danny confirmed with Bob exactly how much network access the new user would be given to ensure maximum security and minimise risk. Later, he sent Bob the configuration settings for the FortiClient software. Finally, having successfully created the new user access, Danny agreed with Bob they would review firewall rules to ensure the network was suitably secure.

Read our article on how to secure your building’s IT network now to learn more.